Sixteen years ago, I was 43 weeks and 4 days pregnant, and preparing to go to work when I went into labor.

We were living in South Carolina, in the house we had built, and struggling to stay afloat.

This was my 5th pregnancy.
The first had ended with a miscarriage at 13 weeks.
The second yielded a beautiful little girl, via a C-section, because she refused to come out in the right direction.  At this point, she was 6 years old, and in first grade.
The third pregnancy gave us our first son, who was at this point almost 4 years old.
The fourth provided another daughter, who had just turned 2 years old.
This pregnancy gave us a second son.

As I was getting ready for work, my water broke, and I knew I had to call off work, and head to the hospital.  First, we packed up all three of the other kids, and took them to Jason's parents' place, and then headed over to check in on the Maternity Floor.

We checked in, and labor progressed normally.  I had to have antibiotics via IV because I had tested positive for Group B strep, but otherwise few interventions were necessary.  When our "little" man finally arrived in the early afternoon, he weighed in at a whopping 10 pounds 3 ounces, and 19 inches long. 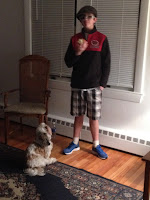 Today, on Epiphany, we celebrate our second son, Justin.  And he's just as awesome now as he was then!
Posted by Laura Paxton at 5:38 PM